“Whenever white America has a cold, black America has the flu…Claims that the recession is over…only confirm that much of what happens in black America is not a matter of national concern—unless, of course, it threatens people who ‘really matter.'” 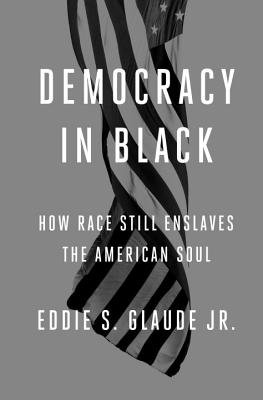 I began reading this book and was hooked from the first chapter.  Since Ferguson I’ve read several books about race relations in America and the black experience.  I’ve read works of fiction and nonfiction, Christian thought and academic pieces, and white and black writers.

Democracy in Black is probably the one you should read if you are only going to read one book on the topic.  Eddie S. Glaude Jr. writes to both a white and black audience.  He discusses history, data and philosophy at length, but also writes from personal experience.  It’s not an easy read; Glaude calls out contradictions and  travesties of both races.

His main premise is simple: America is NOT a post-racial society, and that is why the #BlackLivesMatter movement is necessary.

You guys, today in America we incarcerate more black people than South Africa did at the height of apartheid.

We have a problem of race in America and declaring it over does  not make it over.  Glaude says the reason is because there is a value gap, that is, “white people are valued more than others in this country.”  All you have to do is watch a Trump rally to see that.  Glaude says, “BlackLivesMatter reminds white people that their lives do not matter more than others.  It is a direct challenge to white supremacy.”

I could go on, but don’t want to summarize the Glaude’s entire work.  This book broke my heart.  We must do better.

I received this book from Blogging for Books in exchange for this review.

2 thoughts on “The Value Gap We Need to Talk About”