This year I bought a produce and egg share from the Rockbridge Farmer’s Alliance, which is comprised of several area farms.  The thirty week season began last Thursday, and I thought it would be fun to document each share and how I eat it each week.  I will spare you from the salads, but will take a picture or two each week and document the new vegetables and recipes I try as a result.

What excited me most about the CSA share was the opportunity to try new vegetables and the first bag definitely did not disappoint.

On Saturday, I dove right in and tried to new (to me) foods: beets and sunchokes.  I roasted the beets, carrots, and sunchokes with some fresh thyme (from Kroger) and garlic.  The verdict?  Honestly, the beets don’t have much flavor, but they also taste somewhat….earthy.  I really liked the sunchokes and hope that future shares include them again.

Tonight I used the kale in a little dish I invented on my own. 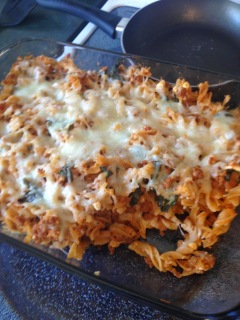 I browned a pound of ground turkey with garlic and onion, then mixed in about a cup of marinara sauce that I had on hand.  Meanwhile, I boiled 16oz of brown rice and quinoa fusilli (I’m not going GF, just avoiding white flour).  After draining the pasta, I put it back in the stockpot and immediately poured in the hot meat and my washed and chopped bunch of kale.  Once the kale had wilted, I put half the mixture into a casserole dish and added a half cup of mozzarella cheese, then added the rest of the noodles and topped with more cheese.  I baked it at 350 for about 25 minutes.  I’m quite pleased.

And the EGGS!  I always silently mocked (pun intended) those who waxed poetic on farm fresh eggs, but wow! Such a difference.  Below is my breakfast from this morning.